Prepare a single long-distance swim from Marseille to Monaco with a plastic collector towed by the supporting boat or by two swimmers on occasions, to demonstrate and encourage the removal of floating plastic waste at sea in coastal areas by pleasure sailors, ports and marinas.

A sports and ecological challenge to help save marine life

The Puremar Challenge will be a single long-distance swim from Marseille to Monaco* in the summer of 2020, to demonstrate and encourage the collection of floating plastic waste along the French Mediterranean coast, in marinas and ports, especially in areas where trash has been accumulated by winds and currents and near river mouths.

I've been picking up plastic trash since I was a young kid. Everywhere and all the time, in cities, in forests, on beaches and underwater... Today, I've decided to take this trash collection a step further and to swim a long way while demonstrating a plastic catching system that can be towed by a pleasure boat, two kayaks or even two swimmers during special events. I will also tow this little plastic catcher while being pulled myself by a LibertyKite® from Yves Parlier because towing it while swimming only is impossible more than say an hour, even with fins.

When you take a walk in the countryside and you pickup garbage along the way, you do good while enjoying nature. At sea and in river, you can do the same: sail while catching trash and you won't catch any fish by mistake (they swim underneath it).

First test in the French Atlantic port of Saint-Gilles-Croix-de-Vie.

Test in the Seine river near Paris with a Finboard by Elvasport.

Preparing the Puremar Challenge involves training myself, trying some equipement and doing tests since 2018, as well as showing the system at the huge expo LaMerXXL that will take place in Nantes in July this year. Because this fantastic fair and event is coming up, and to make sure I'll benefit from its visibility while also raising a bit of money for this summer, I'm doing a first round of crowdfunding now. Next year, I'll do a second round of crowdfunding and fundraising for' the full challenge. Up until now, I've financed mostly everything alone and I got a free wetsuit and a discount on a few things from Scubaland.

When I got this idea, I was very lucky to meet Thierry Thomazeau. A former fisherman based in Vendée on the French Atlantic coast, he designed and built an oil collection net back in 1999 and 2002 during the major oil spills of the Erika and the Prestige tankers. Since then, he has improved the systems and he has dedicated his life to removing heavy oil and plastic trash from the seas with his company, Thomsea. Its collection systems have been used by the French Navy to fight oil spills for over 15 years, and in March they were instrumental in catching almost all the oil from the Grande America tanker, which prevented it from reaching the French coast in large quantities. Thierry built and lended me the small prototype that you can see on the photos and that I've updated for the challenge.

With the two Finboard of Guillaume Turbec, during the first tests in the Seine river.

The two red and yellow swim boards that you can see above are Finboard Race boards that Guillaume Turbec designed and built. I thank him very much for that and you can see him swimming with me in the following video. Such a swim board lets you swim faster and with less efforts than without it, and one of them was used by Rémi Camus last year for his swim around France (Atlantic and Mediterranean coasts). All my congratulations to you Rémi! I will do less miles than you but will tow the collection system on occasions, and all the plastic collected will be weighted, sorted and either recycled or turned into fuel through pyrolysis at the end of the challenge.

In the Seine near Paris with Guillaume Turbec and his wonderful Finboard.

Cleaning up the Seine in Bougival near Paris during World Cleanup Day of September 2018.

After the clean-up in Bougival with the members and volunteers of the ASPIC society.

Demonstration in Paris at La Villette during the Open Swim Stars race.


Of course, everybody agrees that we must turn off the tap on land in the first place, and recycle plastic so it does not end in landfills and in the oceans, where it kills animals and plants. But this is not going to happen soon, despite all our efforts, and lost plastic will take several centuries to break into small pieces and then disappear, while being lethal during all this time. Plastic kills birds, whales, turtles, dolphins... contaminates fish, plankton and seaweeds. Everything.

So, even if we can only collect very small amount of plastic on the surface (most of it drawns to the seafloor and ends up even in the Mariana Trench...), even if I only get a few people to change their habits, a few marinas or municipalities to ban plastic straws or to close garbage bins along my itinerary as they support the challenge and match it with a commitment, even I only get a few sailors to do their bit while sailing, I'm doing my hummingbird fighting the fire: one drop at a time. I swim, I collect, I demonstrate, I try to inspire and this is the mission I've assigned to myself.

LaMerXXL expo is giving me a free floorspace because the Puremar Challenge is one of the projects awarded by their jury, which I thank very much for this. The rest is not free and I need to cover the transportation cost to Nantes from Paris and back, to print flyers, roll-up banners and to purchase some equipment for the demonstrations in the Erdre river during the expo. I will also need to replace some worn out equipment I obtained from Scubaland. Then, the rest of the money will go towards covering the costs of travelling to the coasts this summer and testing towing the collector by the sailboat of Chloé and Victor from the Ocean Loop project: they too want to fight plastic pollution at sea!

Puremar is a non-profit association registered in France, dedicated to help fight plastic pollution in rivers and in the oceans. After the 2020 challenge, we will setup a large clean-up operation to tackle very polluted areas like this "island" of plastic that drifts and changes between Corsica and Italy.

Will all my gratitude,

*Depending on partner municipalities or marinas and my final budget next year, I'd like to be able to swim from the Spanish border to the Italian border, involving two more countries as pollution knows no borders... This would mean swimming more than 650km but Rémi Camus did it last year, in addition to 2000km of Atlantic coastline. So, if possible, the Puremar Challenge would follow all the south continental French coast before adding Corsica to the project later on.

Raised in Lorient in Brittany with family roots nearby, I enjoyed swimming and diving between the islands of Groix and that of the Glénan, before discovering the Mediterranean Sea later as a teenager.

The Puremar Challenge takes my free time and, although I didn't choose a job related to the sea in the first place, this project allows me to start something real to fight plastic pollution in the oceans. After this challenge, I will prepare a large cleaning operation in the Mediterranean Sea and will look at removing plastic trash on the seafloor too.

Plastic pollution is by far the most serious pollution that the Earth has suffered from, ever. It's worst than air pollution, GMO, pesticides or nuclear waste, for example, for which solutions exist. Moreover, plastic debris directly kill marine life. When they haven't strangled a bird or a turtle, they kill whales and seals or endup as small particules in fish and plankton, before they will one day lead to the end of life in all seas. And this day, that'll be it for us too...

Yes, there will be more plastic than fish in the sea by 2030 or 2050 if we carry on like this, and before that all sea mammals, birds and large fish will have disappeared. So we must do something now and not tomorrow. I love the oceans and I can't stay put without trying something, albeit small, to help by demonstrating trash collection at sea. If we cleanup large areas of seas, we might have life recover in them, providing the climate crisis we have created still allows life to exist in these too hot and too acid waters. Every piece of plastic that we remove from the sea, it's five centuries less of poisoning and killing...

I also volunteer for the ReCleanSea association, a non-profit initiative by a group of people who precisely work on industrial solutions to collect plastic trash at sea and in rivers, with larger collectors than mine but similar.

When I don't swim, I run with home-made minimalist sandals. And when I don't run, I help companies or leaders add some empathy into their activity because, at work too, we need to "be" more than to "have". We have destroyed our planet because we humans have wanted to "have" too much, so it's about time that we simply want to "be" (happy, healthy, joyful, kind, generous, useful, successful, but without someone else or something else suffering from it...). A former journalist (Le Parisien, 20 Minutes), I also train journalists through the CFPJ.

First, for the LaMerXXL expo this July: to pay for going to Nantes from Paris and back, to print some flyers and roll-up banners, to replace worn-out swimming gear.

Then, for this summer: to pay all transportation costs for trials (going to the Atlantic coast for trying the kite and trying the towing behind a sailboat, etc.); to buy additional swimming, photo and safety equipment depending on what sponsors will have offered me or not.


Find news here very soon!
Be the first to contribute! 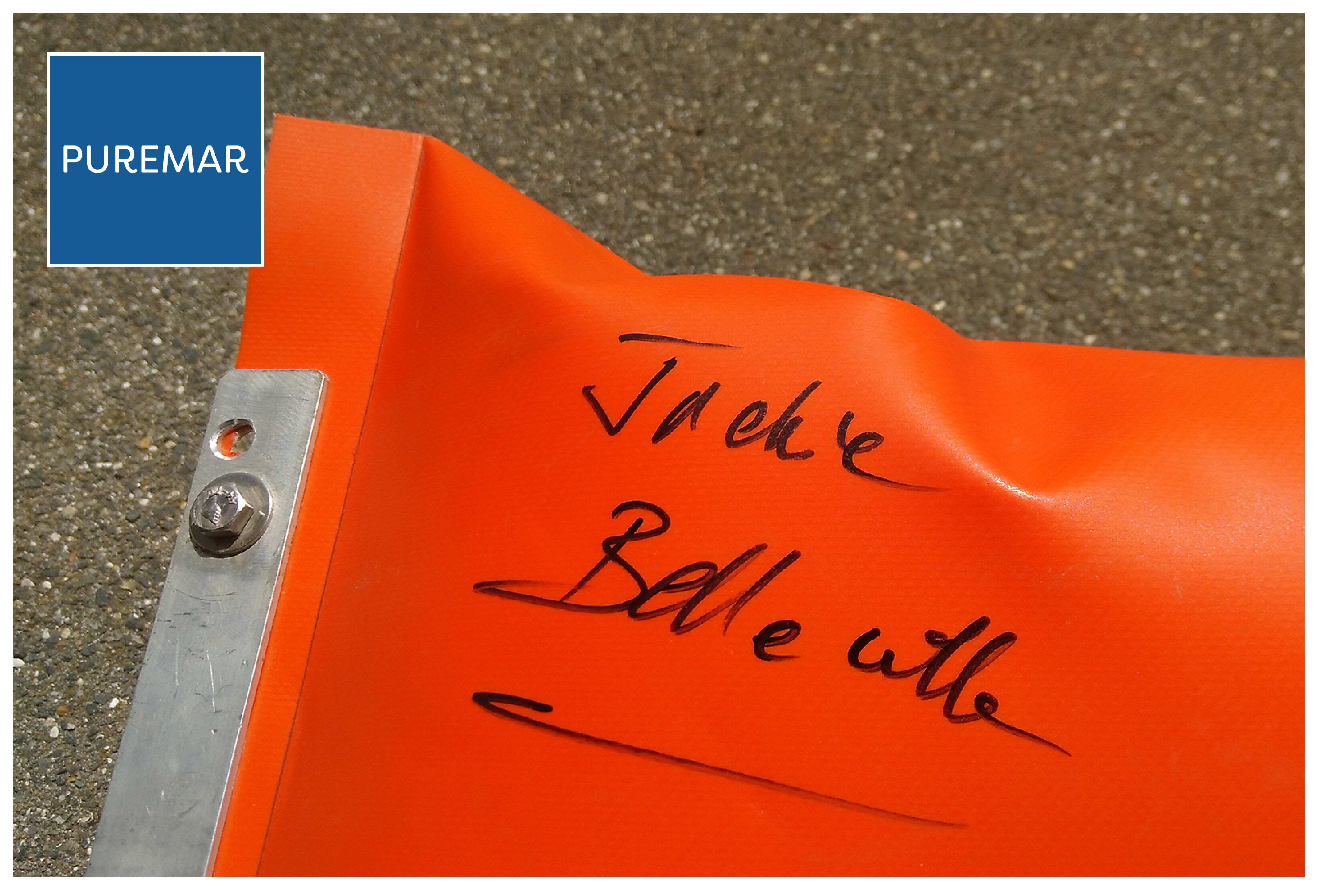 Your name signed or printed on the plastic collector. 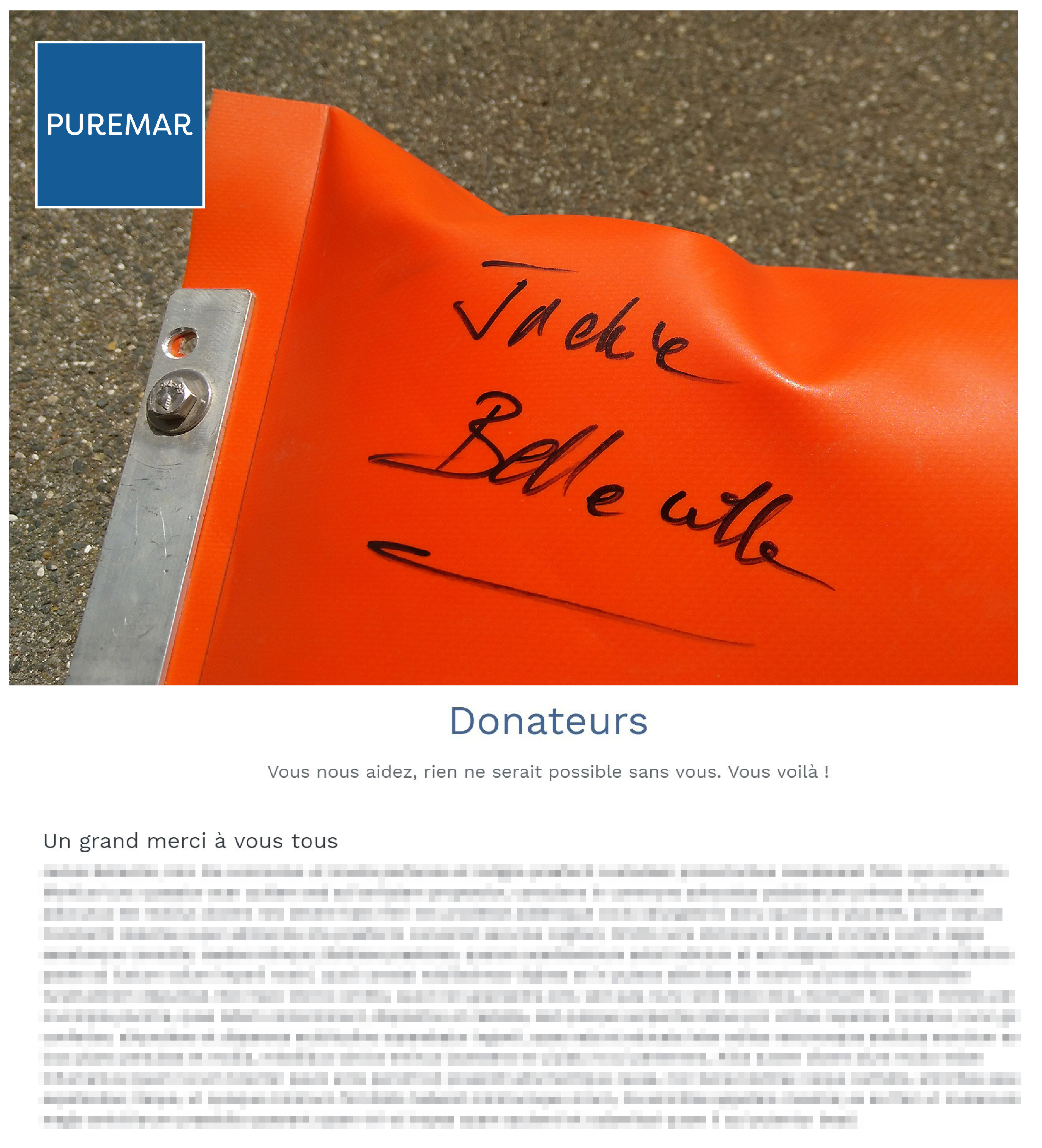 Your name signed or printed on the plastic collector and on the website among the donors. 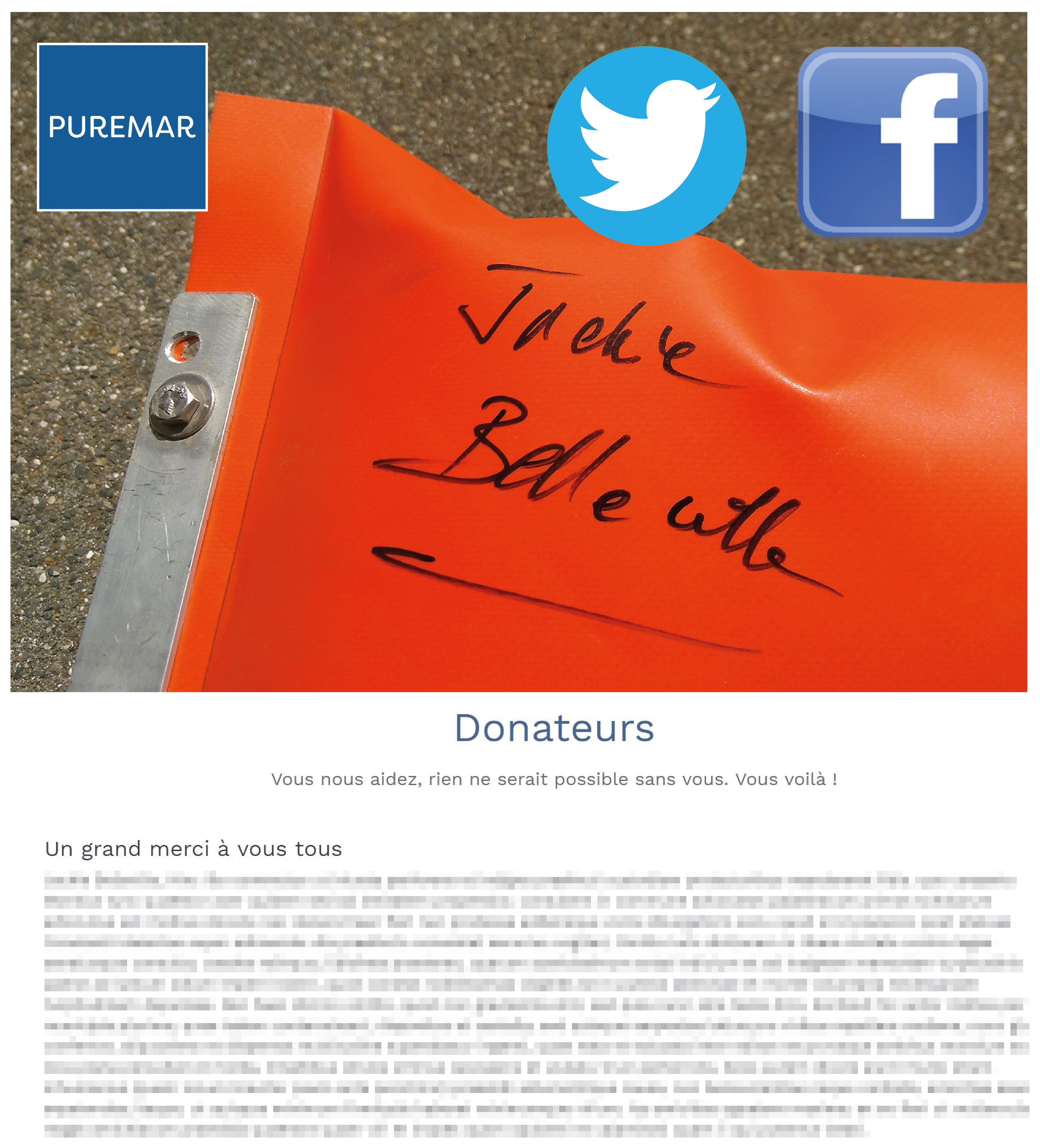 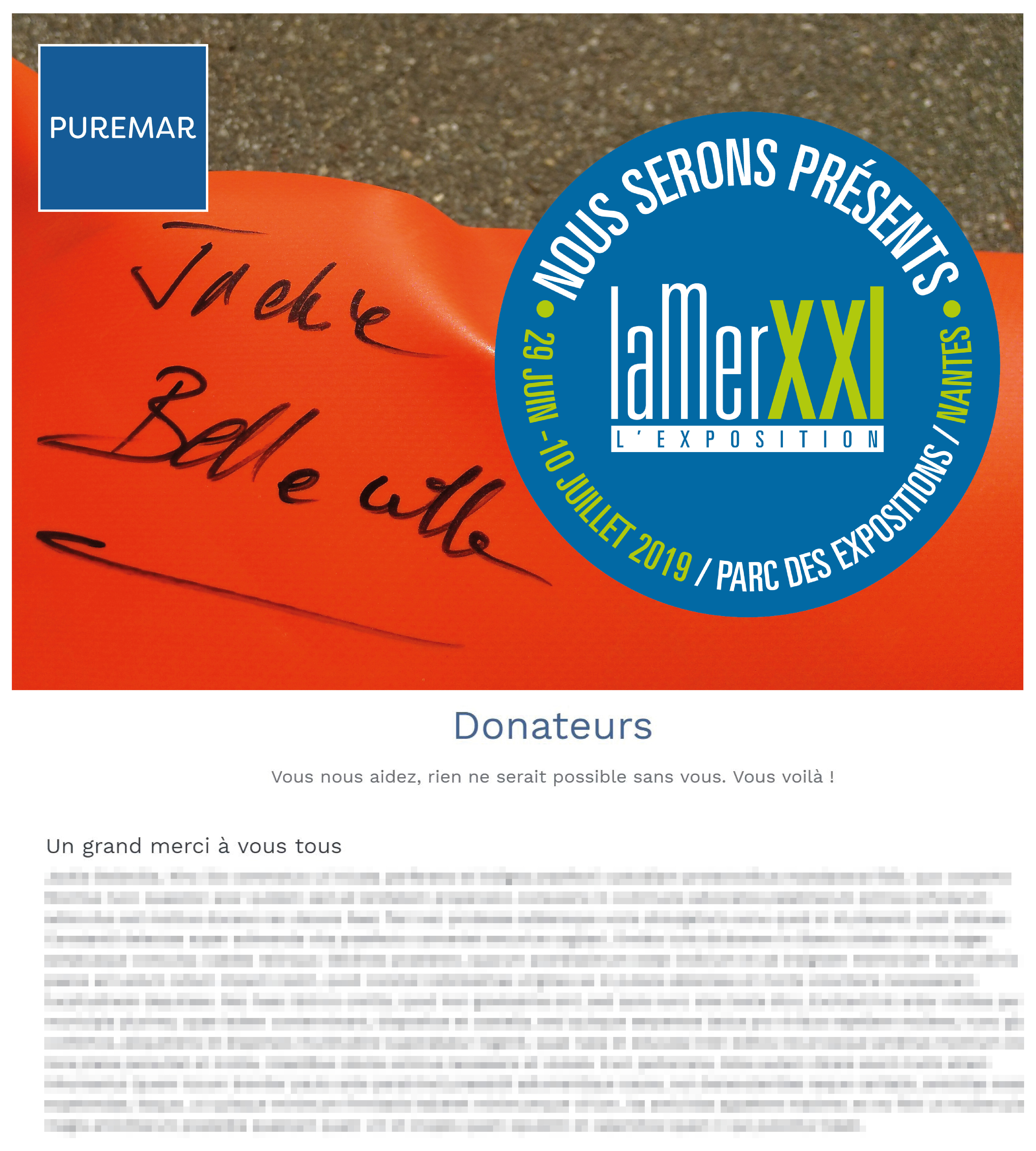 Your name on the plastic collector and on the website, as well as a thank-you Facebook post or tweet if you wish and an invitation to visit LaMerXXL expo for two persons for one day (ticket value: 30€ for two). 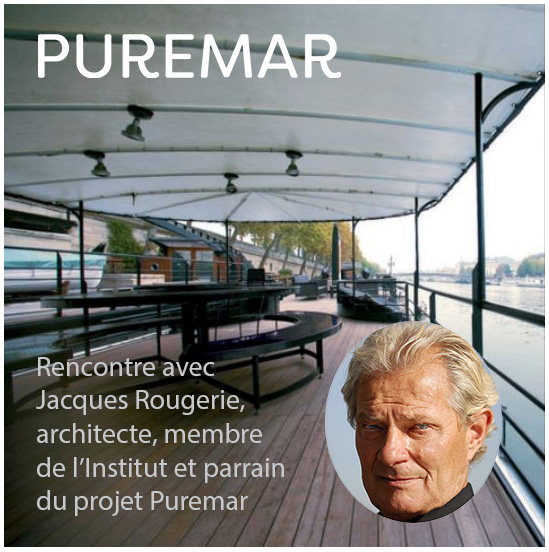 Your name on the plastic collector and on the website among the donors, as well as a thank-you Facebook post or tweet if you wish. In addition, an invitation to meet visionary architect and académicien Jacques Rougerie, the godfather of the project, during a breakfast or a drink on his houseboat in central Paris (cost of travel to Paris not included).